THE HISTORICAL SOCIETY OF TEMPLE CITY

A BRIEF HISTORY OF TEMPLE CITY

It all began when Abraham Temple arrived in Salem, Massachusetts from England in 1636. However, it was not until 1822 that a descendant by the name of Pliny Fisk Temple was born. He and an older step brother would later have great influence on our area.


Pliny Temple left New England in 1841 to join Jonathan. His mother permitted him to stay in California for two years; he did not return home for thirty years! His arrival being in Monterey by sea and then by horseback to Pueblo de Los Angeles.


Pliny took a job with Jonathan in his general store. He learned Spanish and four years later was baptized at Mission San Gabriel. His godfather was Hugo Reid, owner of Rancho Santa Anita. Mr. Reid gave him his added name “Francisco” becoming Francisco Pliny Fisk Temple. He later married the daughter of William Workman, Antonia Margarita Workman. Mr. Workman was a trader coming from Santa Fe, New Mexico, with his partner John Rowland. Both of these families were granted acreage surrounding the present-day Mission San Gabriel.


In 1850 Pliny acquired co-ownership (through marriage) of Rancho La Merced.Here he settled raising his family, cattle, and crops of peaches, apricots, olives, figs and other fruits on 2300 acres. One of Pliny and Antonia’s eleven children, Walter P. Temple was born in 1869; he would later become the founder of the Town of Temple which would later become known as Temple City.


In the 1870’s, after many years of drought conditions Pliny lost most of his assets. Jonathan also faced financial failure during this time. They negotiated a loan from the famed Elias “Lucky” Baldwin, but later lost it all through forfeiture to Baldwin.


In 1903 Walter P. Temple married Laurenza Gonzalez. The couple had four children, one of whom Thomas II, would later supply money to his father to fulfill his dream of establishing a middle-class community. Thomas discovered oil in the La Merced Hills (now the area of the City of Montebello), thus enabling the repurchase of the land from Lucky Baldwin. Walter was able to realize his dream in 1923, in the establishment of the Town of Temple. This was a town where people of medium income could come to afford a home and build a life for themselves and their family.


In 1924 the town further blossomed after Walter petitioned and received an extension of the Los Angeles to Alhambra line of the Pacific Electric Railway Co., known at the Big Red Card. The name of the town was changed in 1930 to Temple City, and incorporated in 1960.Unfortunately, in the early 1940’s the Pacific Electric Railway discontinued the route to Temple City. 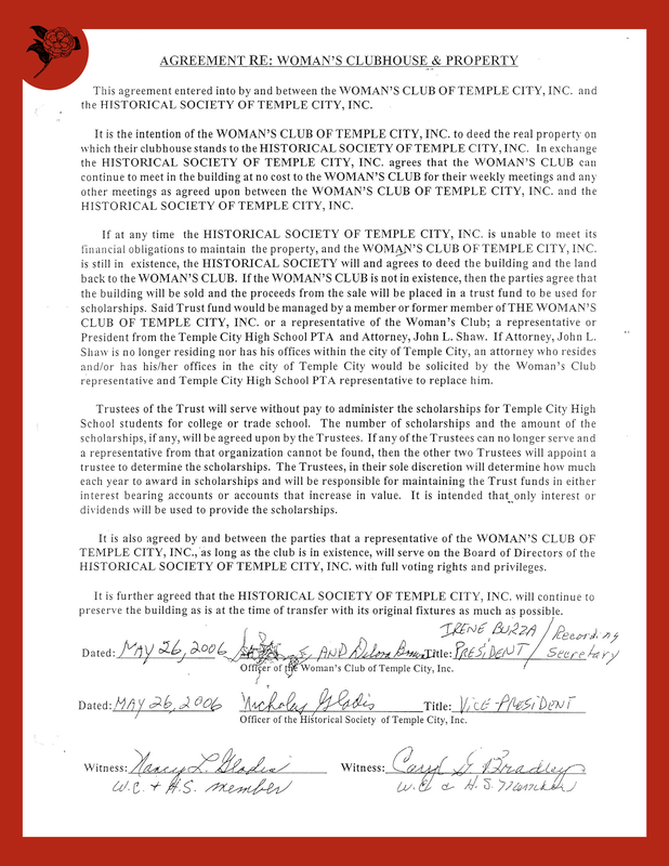